“Oooooooooooooooh,” the audience gasped at the image of a manila envelope splayed across the screen before them. It was 2008, and Steve Jobs, the digital messiah himself, was holding court at the Moscone Center in San Francisco, dressed in his signature presentation attire of turtleneck, jeans, and New Balance sneakers. […]

“Oooooooooooooooh,” the audience gasped at the image of a manila envelope splayed across the screen before them. It was 2008, and Steve Jobs, the digital messiah himself, was holding court at the Moscone Center in San Francisco, dressed in his signature presentation attire of turtleneck, jeans, and New Balance sneakers. At the time, laptops looked mostly like squished cinder blocks, with thick and bulky frames and about as much sex appeal as Donald Trump on a golf outing. Jobs had a tradition of saving big announcements until the end of a presentation—“one more thing” for the faithful followers—and this year was no exception. “It’s so thin, it even fits inside one of these envelopes that we’ve seen floating around the office,” Jobs said as he pulled the first MacBook Air out of a manila envelope, like a doctor delivering a baby. This, of course, ushered in more “oohs,” “aahs,” claps, and cheers from the audience as they beheld a silver laptop—the thinnest computer ever made.

A lot has changed at Apple since that day in 2008. Jobs passed away, and the company became the most valuable company on the planet, with an incomprehensible market valuation of over $2.5 trillion. Yet, some things haven’t changed, including, up until a few weeks ago, the overall design of the MacBook Air that Jobs showed off 14 years ago. For more than a decade, the design of the Air largely remained unchanged, with a few minor tweaks here and there. Until last month, that is, when Apple unveiled a completely new design of the MacBook Air, which runs on the company’s new M2 chip.

The laptop, which is the shape and thickness of a pad of paper, comes in four “colors”: starlight, space gray, silver, and midnight. (The midnight looks black to me, but Apple representatives insist it is a blueish-blackish-midnight color.) The reception among critics has been predictably gushing. “Gorgeous,” CNN declared. The Verge called it “beautiful.” And CNBC said it was “near-perfect.” I’ve used the new Air, and those adjectives are on the money. But I did find myself wondering: What took so long to change the design?

In recent years, Apple and other tech hardware companies have faced a conundrum. You used to want the latest laptop because it was noticeably thinner and faster than the one you already had. But for quite a while now, laptops have been thin and fast enough for most people’s purposes—even as it became prohibitively expensive to make them any thinner or faster. The limitations of physics made it difficult for anyone—even Apple—to come up with new cutting-edge products.

Apple addressed that problem by developing new computer chips, known as M1 and M2. According to several executives I spoke to, the chips have been in development in one form or another since Jobs was alive.

“This is the thinnest logic board we’ve ever made for a Mac to date,” said Evans Hankey, vice president of industrial design at Apple on a video call last week.

I asked which came first, the design of the new laptop or the design of the new chip. Tim Millet, vice president of platform architecture at Apple, said, “The chip is always inspired by the goals of the product and the features of the hardware.” The M2 chip, he added, is known as a “system on a chip,” because it integrates several different computing components in one place. Most importantly, it eliminates the need for a fan, which not only bulks up a computer but also makes it sound like a rocket ship about to take off when it heats up. The M2 chip (and the M1 before it) is smart enough to know when it’s overheating and to thermally apply the brakes when needed.

“We started [the design process] knowing we wouldn’t have a fan, and that’s a really big deal, both in terms of just your experience as a user but also in terms of the volume a fan takes,” Hankey explained.

Today, Apple is the most profitable company on the planet, and it has regained most of the value it lost during this year’s nauseating stock gyrations. But the “oohs” and “aahs” around its product lines have quieted considerably. The last major new product category it released was the Apple Watch, and that was back in 2015 when Barack Obama was still president. Though the iPad has changed in speed and size, the latest models aren’t all that different from the original that debuted to plenty of “oohs” and “aahs” in 2010. And unless you count the new high-speed professional editing machines that cost as much as $54,000, the company’s computers look and run much as they did several years ago. Which, for Apple, has been a big problem.

Back in 2011, I broke the news that Apple was exploring the possibility of developing an Apple-branded television. Viewers would interact with the device using Siri—a feature that Jobs had told his biographer, Walter Isaacson, was necessary to rid the world of the era’s hideous remote controls. Here’s what I wrote at the time:

I was told repeatedly that Apple would eventually make a television. “Absolutely, it is a guaranteed product for Apple,” I was told by one individual. “Steve thinks the industry is totally broken.”

The TV never actually came to fruition. When I started asking around as to why, one Apple employee, who asked not to be named, explained: “We looked at the TV market, and it turns out that most consumers buy a new television every 10 years. We really don’t want to get into a market where we’re selling a single device to our customers every decade; we need them to buy a new device every year.”

But for a variety of reasons, including the rollout in recent years of designs that some perceive to be stale, some people no longer feel a burning need to upgrade to the next iPhone or iPad. Apple’s products are becoming more like those televisions that you wouldn’t think of swapping out every year.

Maybe the M2 chip, and the sleeker shapes it makes possible, will usher in a bold new era of design from Apple. But the company is also trying to get consumers to rethink what makes a device “new,” with less of a focus on speed and size and more on other features. “Now, with Apple silicon, you have a product that can handle any task you can throw at it, and consumers are looking beyond performance to what kind of battery life am I getting, what is my experience with my built-in camera, speakers, and microphones,” said Laura Metz, a senior product manager at Apple. “That’s what we’ve started talking about more so than some of the speeds and feeds of the silicon or chip technology itself.”

Apple is rumored to be working on a slew of new product categories that will supposedly debut in the near future. According to Bloomberg, the company plans to release a fully self-driving electric car, known internally as “Project Titan,” in 2025, but development of the vehicle has been plagued by strategic pivots, executive turnover, and other woes. According to Apple analyst Ming-Chi Kuo, the company is also expected to release a “game changer” of an augmented-reality and virtual reality headset with “see-through” video that allows you to watch video and see the real world around you. According to Kuo, the device is “the most complicated product Apple has ever designed.”

Last quarter, Apple posted revenue of $83 billion and profits of $19.4 billion, far more than any other company on the planet. To sustain that kind of performance, it will need to live up to its tradition of turning out extraordinary new products. If the new MacBook Air is any indication, the M2 chip will be key to fulfilling that promise. 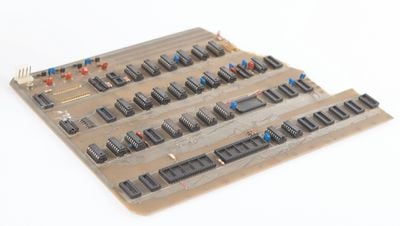