A “lost” artifact from the dawn of the age of the personal computer is going up for sale. Steve Job’s original, hand-soldered “Apple Computer A” prototype built in 1976 to support Apple’s first big contract is on the auction block at RR Auction. The 1970s were something of a Wild […]

A “lost” artifact from the dawn of the age of the personal computer is going up for sale. Steve Job’s original, hand-soldered “Apple Computer A” prototype built in 1976 to support Apple’s first big contract is on the auction block at RR Auction.

The 1970s were something of a Wild West era for the computer industry as the invention of the microchip and the rapid miniaturization of electronics seemed to alter cyber technology on a daily basis. It was a time when room-filling mainframes were giving way to minicomputers as corporate giants like IBM tried to adjust to a changing and rapidly expanding market. Meanwhile, a much more serious challenger for industry dominance began to emerge from the unlikely hobbyists who were building microcomputers from kits for fun.

Today, we think of Apple as being one of the world’s most successful tech companies, but in 1976, it was still a tiny wannabe run by Steve Jobs and Steve Wozniak out of a California garage. At that time, they saw their Apple microcomputer as another kit that would be sold to hobbyists to assemble themselves, but when Jobs approached Paul Terrell of The Byte Shop in Mountain View, California to sell him kits that would retail for US$40 a unit, things took an unexpected turn.

For the sale, Jobs and Wozniak assembled a prototype computer to show what the Apple-1 could do. This seemingly simple motherboard assembly, soldered by Wozniak, so impressed Terrell that he asked for 50 fully assembled computers that would sell for US$666.66.

The rest, to coin a phrase, is history.

What is surprising about this sale is that, as is often the case, no one recognized the historic significance of the Apple-1 prototype and it ended up neglected in the possession of Jobs, who saw it as little more than a source for parts for early production Apple-1 computers, before giving what was left to the current owner.

That is where matters stood until this year when Apple-1 expert Corey Cohen examined the board, comparing it to Polaroid photographs taken by Paul Terrell in 1976 and published in Time in 2012, and vouched for its authenticity.

The prototype differs significantly from later Apple-1s, aside from being damaged, in that it has three orange Sprague Atom capacitors, rather than the Big Blue capacitors used on the production Apple Computer 1. In addition, it is inscribed with the words “Apple Computer A, © 76” instead of the production model “Apple Computer 1, Palo Alto, Ca., Copyright 1976,” as well as several technical differences and signs of Wozniak’s distinct three-handed soldering technique, where he held the solder in his mouth while working.

The auction for the Apple Computer A prototype runs through August 18, 2022 with the bidding currently at a surprisingly low US$278,005.

Apple already sold everyone an iPhone. Now what?

Thu Aug 11 , 2022
Fifteen years after its launch, the iPhone “continues to change the world”, said Tim Cook, Apple’s chief executive, as the company reported quarterly earnings on July 28th. It has certainly changed Apple. In an otherwise bumpy week for technology stocks, the world’s most valuable company beat forecasts to report a […] 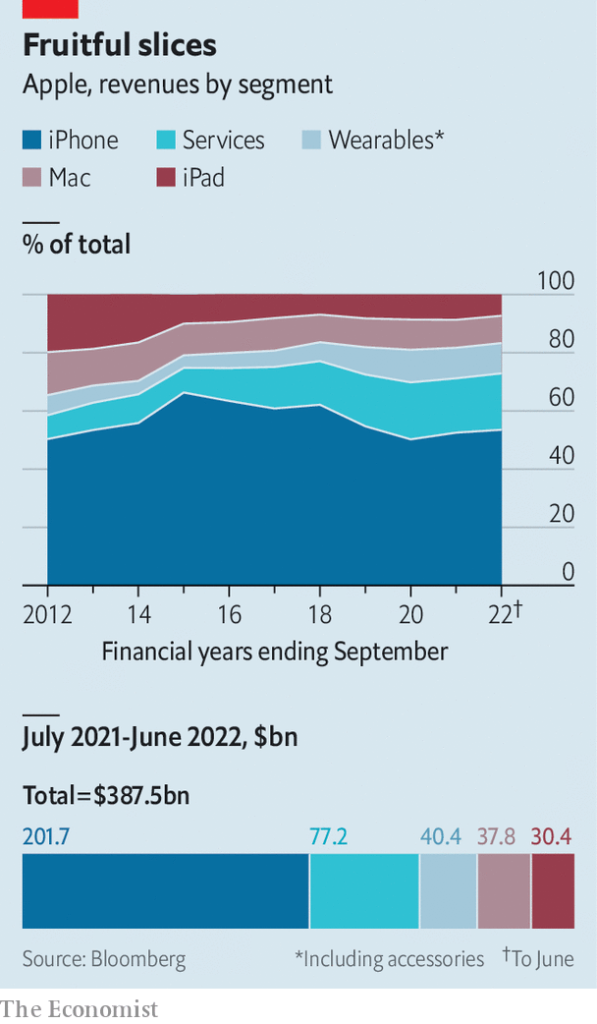